A Haunted Castle in Ireland

Did you ever experience spirits, hauntings or ghosts?

If not, this is your opportunity to enter the realm of the supernatural ! The place is called “Ross Castle”, overlooking Lough Sheelin, one of Ireland’s preeminent midland lakes. This castle has the stately, yet rustic country accommodation to suit the ghostly atmosphere. The noises of the evening winds howling from the lake into the ancient trees and the knocking on windows add to this truly, spine-chilling ambience.

But let us tell you the true story of our famous ghost:

It all started back in 1536 when Richard Nugent, the 12th Lord of Delvin had the castle, we today refer to as Ross Castle, built at the edge of the Pale, the anglo-saxon dominated heart of medieval Ireland. Its position at the top of a steep hill on the shores of Lough Sheelin, overlooking the enemy territory of the O’Reilly’s to the north, was of strategic importance. Workmen in the nearby Ross quarry took several years to cut the stone and erect the formidable tower of the castle. It would be surrounded by walled living quarters and defensive buildings. Today’s entrance gate into the inner yard has survived the centuries and is tribute to the extraordinary workmanship of Ross’ stone masons, which made them famous across the country. Underground grottos and walkways have been rumoured to constitute the subterranean structure of the castles’ flagstone foundations.

Richard Nugent, called the Black Baron, was of bad repute. He was hard on his people, ill tempered and said to possess a mean streak, thus his nickname. One story, which is told about him to this day occurred in the village of Ross, many centuries ago: a towns-woman had just finished baking her bread and placed a large loaf on the window sill of her cottage to cool out, when a dog happened to come by. Surely surprised about such an easy meal, the dog grabbed the bread and made off with it. No sooner had this happened, that the woman realised the missing loaf and yelled out through the open window “Thief ! thief !”, upon which the puzzled dog dropped the bread and ran for cover. Now it occurred that soon after a beggar was passing through the village. He was tired and decided to take a rest under a nearby tree to have a snooze. That day the baron and his entourage were out for a hunt along the lake, when he heard the story about the bread thief. It made him angry about the lawlessness in his realm.

As fate would have it, he soon would encounter the beggar, still enjoying his rest. Knowing of the bread gone missing in the nearby village, the baron questioned the vagrant. The latter, knowing that he had done no ill, told him that he did not know about any bread. The baron flew into a rage about being lied to so blatantly, accusing the beggar of stealing the bread. The poor vagrant argued his case, but to no avail. There, on the spot the baron made his men prepare a gallows. As master of the land he possessed the right to pass judgment and to decide over life and death. The beggar was hanged right there and then. This was the nature of Richard Nugent, the Black Baron.

Later, the townspeople found the missing bread. They planted a cross at the place where the gallows stood and where, after 500 years it is remembered to this day.

But let us get back to our ghost. The Black Baron had a daughter, Sabina. Although of ailing health, she grew up to be a beautiful, young woman. She spent much of her youth at the shores of Lough Sheelin, near Ross, in the charming scenery of the Irish countryside. Although the daughter of an English Lord, extended walks brought her into contact with the local Irish. She was pleasant and well liked by the village folk. Commonly she would have a governess accompanying her, but now and then she would manage to get away without being watched. 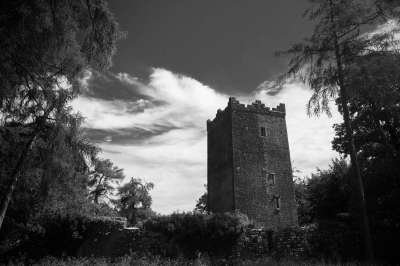 On one of these occasions she was walking down to the bridge across the Inny, which formed the border of her father’s dominion. Down there she met a handsome young man with whom she started chatting. His name was Orwin, son of an O’Reilly chieftain. Time suddenly flew and upon parting they promised to meet again. More and more often they would meet in secrecy, since it was unprecedented for the daughter of an English Lord to visit with the son of an Irish Chieftain. They soon fell deeply in love for one another.

Time passed and the longer they waited the more the realization grew that they could never be together. They talked about getting married and spending their lives together. But their families were foes, waging war on one another time and time again. Orwin and Sabina grew desperate. Their commitment to each other was stronger than their family quarrels and the politics their lives were embroiled in.

Without any hope in sight, one day, they decided to elope. Without any future for them in the land they were raised in they had to say farewell and leave to seek their fortune in common elsewhere. One night they met again in secrecy. They boarded a boat down by the shore and started to row across the lake. As they were well on their way, a sudden storm, of the sort that often blows in from the west, came up and caught them by surprise. They came off course, could not return and struggled as the storm grew stronger. A gale and a sudden swell caught the boat and overturned it. While Sabina was rescued but did not wake up for 3 days, Orwin drowned, his body eventually being retrieved from the Lough’s wet grave. Upon realizing that her lover was forever gone, Sabina fell into deep despair. So grave was her hopelessness, that she would lock herself up in the castle’s tower, not eat or drink until she fell into a deep sleep, from which she never woke up. 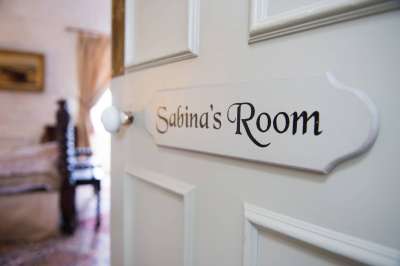 To this day, Sabina haunts the castle’s walls. Visitors and guests make frequent encounters with her spirit, still in search for her lover and restless until the day she will be reunited with him.

It is said that Sabina’s fate was the pay back for her father’s cruel deeds. His soul will not find rest over the fate of many of his victims and his grief for the loss of his only daughter. The Black Baron’s presence has been reported by visitors in the vicinity of the castle on numerous occasions.

Here are some newspaper articles and online blogs written by some of our customers:

And Ross Castle is listed as one of the most haunted castles on many websites and blogs, below is just a small collection: