The ancient village of Ross is situated on the south side of the River Inny as it enters Lough Sheelin. Its origins go back to the early iron age, with many remains of dolmen stones, ring forts and Norman castles found in the immediate area.

Throughout the middle-ages this region has been the battle ground between the anglo-saxon conquerors to the east and the celtic Irish to the north and west. The Pale, that area extending west from Dublin controlled by the English ran out at the shores of Lough Sheelin. Beyond was the reign of the Irish chieftains with their clans: the O’Reily’s, McCabe’s, O’Neil’s and McCormick’s. The border region of the Pale was the domain of the Nugents. Gilbert de Nogent, leaving his home in France, can be found as one of the principal men taking part in William The Conqueror’s 1066 invasion of England. In return for his loyalty and service the “de Nogents”, who later anglicized their name to Nugent, received titles and lands in England.

In Ireland, allied with the celebrated Hugh de Lacy, who had been granted the greater part of County Meath, the heart of the Pale, young Gilbert was given the hand of de Lacy’s sister and with it as dowry the Barony of Delvin. The Nugents were always “King’s Men”, realizing full well on whose goodwill and strong arm their lands and titles rested. They did their utmost to maintain and where possible expand their foothold in the new colony. In later years that domain stretched as far as the shores of Lough Sheelin, into the lands of the Breffni border. The English encouraged their lords to erect strong fortifications for defense against the local Irish, from whom the land had been taken. In the early 16th century the English Crown granted the extensive sum of 10 Pounds Sterling for every fortification or tower house erected by their subjects.

Accordingly in 1533 Richard Nugent, the 12th Baron of Delvin commenced the construction of a stronghold, which was to become known as the Castle of Ross. The tower was completed by him in 1537. The great hall and further extensions were finished by his grandson, the 13th Baron of Delvin in 1539. 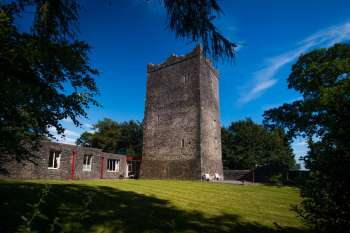 The Castle served as a guard at the western reaches of the Pale against the celtic Irish across the lake in what today is County Cavan. In decades following, the Nugents started to merge with the local Irish and soon O’Reillys can be found in the family annals.

The Castle of Ross came to its final fame in the summer of 1644 when Myles O’Reilly, the Slasher, spent in its walls the night before the Battle of Finea. There, confronting Cromwellian troops on the bridge the next day, he himself was slain. In retribution the English reduced much of the Castle of Ross to ruins. The tower of the same and some outbuildings were rebuilt by a later descendant in the 19th century. In 1864 Anna Maria O’Reilly also installed a large plaque, commemorating her heroic ancestor in the tower hall. One hundred years later Sir David Nugent rebuilt the entire compound as a family estate in its present outline. At that time modern conveniences were added to the building complex.